The winds were so strong they helped injure a sailor, but Chris Law used them to his advantage.
As the second annual Frenchman's Reef Match Races blasted around St. Thomas Harbor on Thursday, defending champion Law, of Britain, finished the first day on top, but Virgin Islander Peter Holmberg was right on his heels.
Law won all three of his sailboat races. Holmberg and two other teams finished the day 2-1.
The wind, which gusted higher than 25 miles per hour, lent dramatic action to the close races. Smoking spray blew off the 40-foot yachts as they beat upwind.
The windward mark was close to the St. Thomas waterfront. Spectators had a close-up view as the racers struggled to remain under control when they launched the colorful spinnaker sails, increasing both sail area and speed for the run back to Road Town, Tortola.
Strong wind contributed to an injury sustained by Terry Hutchinson, a member of racer Paul Cayard's crew. Hutchinson was thrown across Cayard’s boat during close-quarters sailing off Frenchtown. Hutchinson was carried from the scene on a stretcher. He was released from Roy L. Schneider Hospital Thursday evening.
Cayard had to forfeit the race, giving Law his third victory.
Racing continues today, Saturday, and Sunday. For more details see www.matchrace.vi. 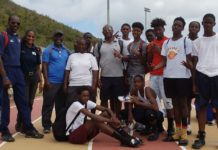